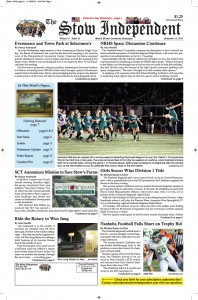 Eversource and Town Park at Selectmen’s

In a rare Wednesday night session, in lieu of meeting on Election Night Tuesday, the Board of Selectmen last week hosted their first meeting in the function room of the Pompositticut Community Center. Chairman Jim Salvie expected greater attendance related to several topics and chose to hold the meeting in the larger venue. While it was not broadcast live, it was taped by Stow TV for broadcast after the meeting…

At the Stow Conservation Trust’s annual meeting Saturday night, the group announced their new initiative “Save Stow’s Farms.” It is an effort that the conservationists hope will preserve Stow’s agricultural landscape and thwart any chance of residential development on the farmlands…

Also in this week’s Print Edition…