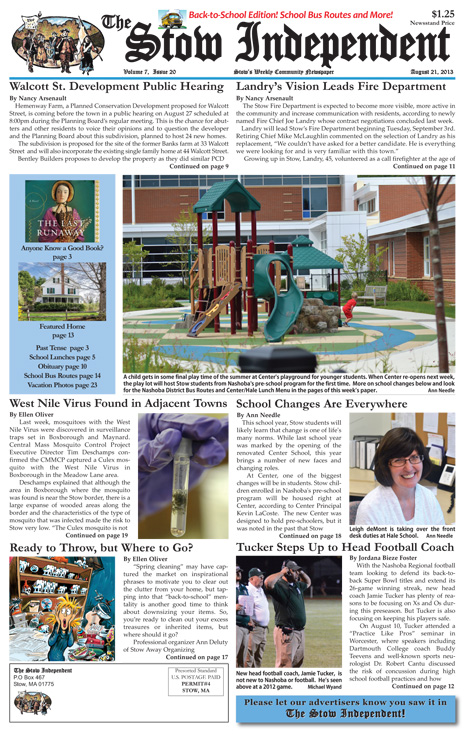 Hemenway Farm, a Planned Conservation Development proposed for Walcott Street, is coming before the town in a public hearing on August 27 scheduled at 8:00pm during the Planning Board’s regular meeting. This is the chance for abutters and other residents to voice their opinions and to question the developer and the Planning Board about this subdivision, planned to host 24 new homes…

This school year, Stow students will likely learn that change is one of life’s many norms. While last school year was marked by the opening of the renovated Center School, this year brings a number of new faces and changing roles…

Last week we showed half of a picture taken at the Town Hall in 1948 at the retirement party of Stow’s long-time tax collector, Henry Warren. The picture below shows the other half of this astute gathering, which includes Selectmen, Police Chief, Town Clerk, farmers, orchardist, Street Superintendent, firemen and others..

Anyone Know a Good Book? .

That’s a common question, according to the staff at The Randall Library, and it seems that Stow residents are providing the answers…

Putting the Power In School Lunch
The back-to-school rush often  reminds people how things have changed. Take lunch money, or lack of it, given Stow students can no longer use it under the PowerLunch system, which is where the digital age meets chicken nuggets…

If you’ve wished for a home with antique charm, plus all of the comforts and stability of new construction, then 160 Crescent Street might be the home for you, according to Stow resident and Coldwell Banker realtor Linda Scobo…