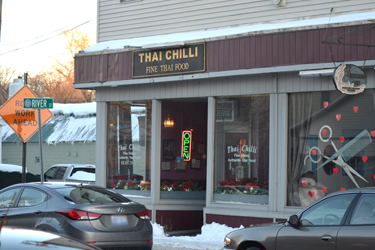 These days, the couch may be keeping you down, whether you’re there after wiping out in your icy driveway, or glued to those stylin’ helmets modeled in the Olympic skeleton event (think “Mars Attacks!”). Even the thought of yanking a package of chicken from the grocery fridge can wear you out.

So, it’s time to pick up the phone—I know, more exercise—and call one of your go-to, local takeouts. Thai Chili in Maynard has been fitting that bill for years, given the number of Stow diners coming and going there.

First, some recent history. Until a year or so ago, this small, clean, warm corner of Main Street was owned and operated by a Thai couple. They sold it, and rumor has it that, unlike the original owners, the new ones are not doubling as the chefs, making the food blander than in the past.
Believe it or don’t, I don’t deal in rumors. But, I did notice things were a bit limper when last dining there a year back. Still, darned if I would let one trip wreck an old habit 5 minutes away. So, I put on the fuzzy sweats and headed out to fetch the family some take-out.

Not Everything You Hear
I’ll make this easy for you: Go there.

The “new” owners have worked out any kinks, for sure. On a recent Sunday night, the place was almost full. They are so busy, their holiday decorations are still up. There also is a spiffy, new counter (there wasn’t one in the past, making it a bit confusing when walking in), and fresh paint and new colors.

As with most restaurants, there are can’t-miss and skip-able dishes. The Dumpling Soup contained three or four really fat, tasty, Peking ravioli-type dumplings. The mild, clear broth set them off perfectly.

In main dishes, to compare the food directly with our Thai Chilli favorites of back in the day, both the Massaman Curry and Basil chicken dishes continue to excite. The Basil Chicken wasn’t what it was, in terms of of it being different than it was, say, 4 years ago. But the quality is still very much there, just a different take. Interestingly, the take on the Massaman Curry Chicken was it has not changed. The Basil and Massaman Curry dishes also come in beef, pork, vegetarian, seafood, etc., versions.

The Crispy Duck came in as the only sort-of disappointment. The meat still was moist and lovely, but the “crispy” seemed to escape.
A heads-up on ordering; it takes time. Our order took 30 minutes, but at least they told me that when I called. In this case, busy is good. And, if that means leaving the December décor up through the 4th of July, so be it.