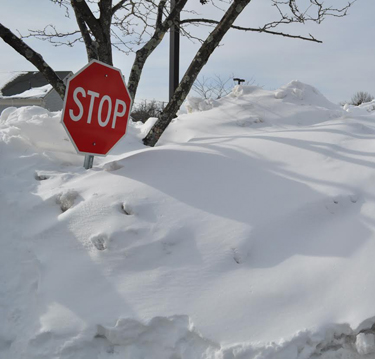 Polar Vortex. Snow & Ice Account. Mesoscale Banding. Yes, those are all  terms that should be familiar to readers by now – well, maybe not mesoscale banding.

Stow’s resident meteorologist and forecaster for WHDH–TV, Jeremy Reiner, said that while this winter has depleted municipal snow removal budgets, cancelled school and activities, and made storm reporting all day events for news outlets, it is not yet one for the record books, though there have been some notable occurrences.

If you ventured out last Thursday afternoon between 12:30 – -3pm, you witnessed mesoscale banding – the effects of snow falling at a  solid rate of 2-3” per hour, appearing to fall with such intensity that visibility is blocked and plows, windshield wipers, and certainly human shovelers cannot keep up with any form of snow removal.

That’s what happened to the Stow Highway Department who, after plowing and sanding steadily for nearly twelve hours, took a short break on Thursday before a planned pre-afternoon commute clean up. Unfortunately, it was during this break that the band of snow came through and dropped the load on Stow, up to 8 inches, according to local gauges.  Reiner said these intense bands are fairly unpredictable as they don’t show up on radar. “Weather models can forecast them to occur, but we can’t predict a time,” he said of the invisible bands that exist within a storm period. “There are little ripples in the atmosphere that enhance these snow bands. They are like waves approaching a beach,” he explained.
Besides these intense bands, Reiner also said this winter is notable for the longevity of the storms and their frequency over the course of the entire winter. Added to that phenomenon, is the fact that there have been two significant periods of warming, with temperatures nearing 50 in both December and January and predicted again for this week. Despite these temperature blips, Reiner said this winter is still one to be remembered for some time. “It’s like the winters our grandparents remember and told us about,” he said. “Lots of snow. Lots of cold. It’s been a good old-fashioned winter.”

And that good old-fashioned winter had already set the town back about $22,000 beyond the snow and ice removal account allocations before last week’s storms hit. Town Superintendent of Streets Mike Clayton said on Friday that that account may now be running at a $44,000 deficit.
According to Town Administrator Bill Wrigley, the town is prepared for the  deficit and achieves a year-end balance by appropriating funds from available sources such as the free cash account and excess revenues. Wrigley said he uses a long term average number to plug-in a cost for the year’s snow and ice removal  account at the beginning of the budget cycle.

“The advantage of this approach,” Wrigley explained, “is that you ultimately appropriate only the precise amount of funds necessary (i.e. avoiding the potential alternative of leaving a large sum of unexpended funds in the account that cannot be used for any other purpose).”
So what does this all mean? Just another winter in New England – predictable only in its unpredictability.