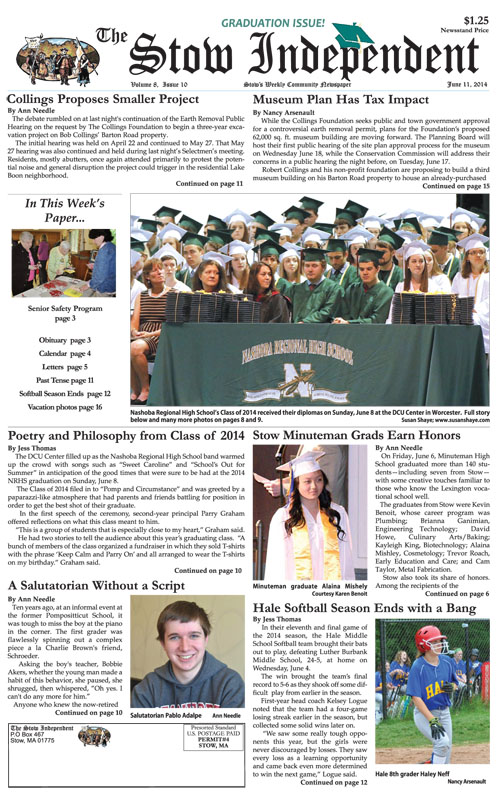 The debate rumbled on at last night’s continuation of the Earth Removal Public Hearing on the request by The Collings Foundation to begin a three-year excavation project on Bob Collings’ Barton Road property.

While the Collings Foundation seeks public and town government approval for a controversial earth removal permit, plans for the Foundation’s proposed 62,000 sq. ft. museum building are moving forward. The Planning Board will host their first public hearing of the site plan approval process for the museum on Wednesday June 18, while the Conservation Commission will address their concerns in a public hearing the night before, on Tuesday, June 17.

A Salutatorian Without a Script

Ten years ago, at an informal event at the former Pompositticut School, it was tough to miss the boy at the piano in the corner. The first grader was flawlessly spinning out a complex piece a la Charlie Brown’s friend, Schroeder.

In their eleventh and final game of the 2014 season, the Hale Middle School Softball team brought their bats out to play, defeating Luther Burbank Middle School, 24-5, at home on Wednesday, June 4.

“We are ready to point out hazards in your home now, so that we don’t have to come to your house later and face an emergency situation,” said Fire Captain John Paul Benoit.  He was part of a team of first responders, joined by State Rep Kate Hogan and State Fire Marshal Stephen Coan in a special presentation to Stow seniors held last Thursday at the Union Church.