By Nancy Arsenault
Have you tested your water or well performance in the years or decades since you bought your home?  If a test was not done in the last year or so, the Board of Health says the time is now. 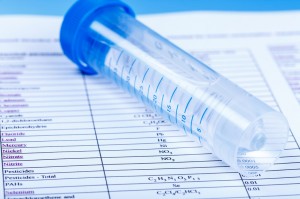 While the cost of such a test is the responsibility of the homeowner, health experts say keeping your water well records up-to-date provides a benefit to home and family for an average cost of $65 – $100 for standard tests.

Stow is a community without a public water supply system, meaning that every residence must establish and maintain its own well to bring potable drinking water into the home.  The Town sits upon at least two prolific aquifers, where water quantity is not an issue. While bountiful, these same sources can deliver water that, without testing and pre-treatment, may bring concerns to users.

Running Clear May Be Deceiving
Local water is considered to be hard water, prevalent throughout with minerals that make dissolving soaps and shampoos difficult. Mineral deposits build up within pipes and appliances and can stain bathtubs, sinks and showers and in serious cases, leave stains on clothes washed in the water. Mineral buildup and sediment within a water heater can reduce that appliance’s ability to heat the water.

Brandi Coulter of Skillings and Sons said her company is in Stow regularly, drilling new wells, repairing and maintaining existing wells and doing periodic water and well performance testing. As for the staining that is so common in Stow, Coulter said, “Water softeners are meant to reduce ferrous iron and manganese. Ferrous iron is clear water iron. If there is ferric iron in the water (particle iron) a sediment filter is recommended to catch that iron before going into the softener.

Dark brown or blackish staining is most likely manganese and is also removed by softening. The green staining is a result of low pH, which is treated with an Acid Neutralizer. It’s the result of the copper pipes being eaten away by the acidic water.”

Dave Knowlton of Nashoba Analytical Labs in Ayer analyzes many water samples taken from homes in Stow. “The most common problems in Stow are the iron and manganese. These would not be considered health-related issues but nuisance issues that would primarily cause taste and odor problems.”

As for health issues, a water test can detect those elements and conditions most harmful to health, said Cyndie Colosi of the Board of Health.  According to a 2011 study released by the Department of Environmental Protection, there are bands of arsenic and lead in certain parts of town that may exceed drinking water standards.  While higher levels may show up during testing, Nashoba Analytical’s Knowlton says, “There are some isolated instances of arsenic failures but not near the levels or frequencies we see in towns to the Northwest.”

When to Get a Water Test
A water test can tell you what is in your water, the pH level of the water and, when combined with a well test, can also determine the efficiency and sanitary conditions of the well itself. Experts say that the spring, when ice and snow has melted and seeped into the ground, with nearly saturated conditions overall, is ideal. If flooding has occurred around a well head, that also triggers the need for a test.

Any situation that could allow for seepage of contaminants whether through agriculture, general landscaping practices, septic failures or extreme wet weather conditions calls for a water and well test.   A winter with more rain than snow is also a good time to run a test. Richard Knowlton adds, “If a homeowner has any idea of putting their house on the market it is imperative that they test the water well in advance. Find out about any problems now, not when a prospective buyer tests it and finds out it has arsenic. This could cost you thousands of dollars to fix and maybe even lose the sale.”

The Board of Health reports that self-sampling of your water is simple and easy to do. Nashoba Analytical will send a water sampling kit to a homeowner, after a checklist of test options has been confirmed online or over the telephone. The pre-testing set up can also be done in person at their Ayer location, where kits can be picked up and brought back home and then hand delivered or mailed back to the lab.  Samples are taken at the faucet and other locations, depending on the specific tests being requested.  Results are available 3-5 days after the samples are received.

Skillings and other multi-service vendors will come to your home and take the sample, and also do well performance tests at the same time.  If there are water pressure issues or flow issues, changes to filters and other onsite quick fixes can make a big  difference, said Coulter.  They can also address actions to alter less than positive water test results.

Water testing does not have to be expensive and most vendors offer basic options addressing the most common minerals and contamination issues. “This should be done every 3-4 years at least, or if any sudden change occurs. Coliform bacteria should be tested annually and would be the most important test to do routinely as it may be of immediate health concern,” said Nashoba Analytical’s Richard Knowlton.

“We also chlorinate every well we service,” said Bandi Coulter of the disinfecting process that is often recommended once a well has been opened. “If the homeowner tests the water for bacteria and it comes back positive, we would recommend chlorinating the well.” This is a simple process involving dumping a quantity of bleach into the well through a specific method,  for a recorded period of time and then allowing it all to flush through the plumbing system. Disinfecting is also recommended by the Board of Health if a homeowner feels there are any possible contamination issues with a well. The internet offers many sites that instruct homeowners on self-chlorination of wells.

“People should rest assured that no matter how bad their water may seem, it can be treated,” said Richard Knowlton of Nashoba Analytical.