By Ann Needle
“I think the night was a huge success!” said Holly Lauer, an organizer for the gala Nashoba Regional High School After-Prom Party.  “We had roughly 170 students attend — we were hoping for at least 100 — and the feedback since has been fantastic.” The party was held at the high school after the May 21 prom, stretching into the early morning hours of May 22.

While the After-Prom Party has been a staple at NRHS for years and at various locations, attracting more students to attend the safe, alcohol-free event over other post-prom activities was a tradition of another sort. Attendance has usually been under 75 students. This year, taking a queue from neighboring districts such as
Harvard, After-Prom organizers launched a major campaign to turn the party into a district-wide event, inviting anyone in Nashoba’s three towns to come out to help transform the high school into what organizer Julie Fish of Stow termed “something the kids won’t recognize.”

Backed by these volunteers and funded by individual donations and several business and civic sponsors, the high school’s main level was turned into a scene from The Great Gatsby, matching the theme of this year’s prom.   The good times included fire pits in the cafeteria courtyard, along with adult-sized, bouncy-house games in the gym—even a giant Twister game board, no injuries reported. There were plenty of food and major prizes, including Red Sox tickets. The committee hopes to get even more students and community members involved next year. 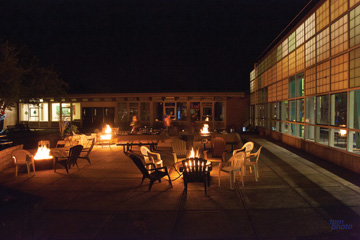