LEOMINSTER – The Nashoba Regional field hockey program has had an impressive three-year run dating back to the fall 2014 season.

The Chieftains have reached the Central Mass. Division 1 Finals all three seasons and have captured a pair of district titles.

Under the guidance of head coach Jaime Mariani, these Chieftains are all business during the fall season. Nashoba takes its field hockey very seriously and it shows.

One of the constants for the Chieftains program is participation in the Fast Break Summer Field Hockey League at Doyle Field in Leominster.

The league is run by director Kelly Marciano. Along with her staff, Marciano works diligently to make sure things run smoothly. Marciano praised the hard work her staff and the players put into the league.

“This is the 15th year we’ve had the league and it’s the seventh year we’ve had it here at Doyle Field. I can’t say enough about the job everyone does in putting this league together and making sure everything runs smoothly,” said Marciano, who also coaches at North Middlesex Regional in the fall. “It’s a real learning environment, not only for the players, who are working on their skills in preparation for the upcoming season, but also the officials. Some of the officials are just starting out and it’s a great environment for them to learn and get some experience before the season starts.”

The summer league features eight teams and began play back in the final week of June. The regular season finished up the second week of August with the top four teams qualifying for the playoffs, which is single elimination. The last two teams remaining will square off in the league’s championship game. Every league contest is played on the field turf at Doyle Field.

“Summer league is great, it’s the highlight of my whole summer,” said Nashoba senior Avril Meininger. “Training for field hockey and getting back out here on the field. Everyone is working so hard but we’re having so much fun at the same time. It’s a great experience.”

Last year, the Chieftains finished the regular season with a 13-2-3 overall record. Nashoba was awarded the third seed in the Central Mass. Division 1 Tournament. Following a first round bye, Nashoba defeated sixth-seeded Shrewsbury in the quarterfinals and seventh-seeded Westborough in the semifinals before falling to top-seeded Marlborough in the title game.

“I think it’s a great way to get to know the younger players, the incoming freshmen. It’s a nice way to start to build those friendships and team chemistry before the season starts in a couple weeks,” said Nashoba’s Hannah Gaffney, who is also entering her senior year. “I think this whole summer league experience is very beneficial. You can definitely see a difference when tryouts begin. It allows us to prepare and work on our conditioning.”

According to MIAA rules the first official day of fall sports is August 24 (with the exception of football, which starts earlier). 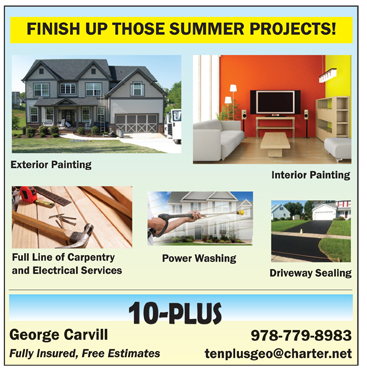