Play for Will Recalls Departed Friends

Everyone grieves differently, but few can channel that pain into a source of hope for so many others. This year, Brendan Aylward pledged to bring in more people to help spread that hope.

By Ann Needle
Everyone grieves differently, but few can channel that pain into a source of hope for so many others. This year, Brendan Aylward pledged to bring in more people to help spread that hope.

The 3rd Annual Play for Will basketball charity game is slated for Friday, May 15, 7 pm, at Nashoba Regional High School. It promises to be another success story for Aylward and his quest to honor the memory of two  deceased friends and neighbors he grew up with on a secluded street in Stow.

Aylward explained that he started this fundraiser in 2013 after his friend Will Hurley was killed in a car accident. Friend Leah Tepper then passed away six months later after a two-year battle with adrenal cancer. Both Hurley and Tepper graduated with Aylward from Nashoba Regional High School in 2011.

The fundraiser features NRHS faculty, along with members of the Central MA Spartans Special Olympics basketball team. Proceeds go to the Tecumseh Foundation and the Jimmy Fund. Founded by Hurley’s parents, the Tecumseh Foundation advocates for improving and expanding children’s athletic experience both on and off the field. Hurley was a quarterback on the NRHS Football Team, holding several records at the high school.

The Spartans are one of several ventures the Tecumseh Foundation has helped support. Aylward explained that he started the team in June of 2012.

Since his days at NRHS, Aylward has remained heavily involved in the Best Buddies program, which offers opportunities for young people with cognitive disabilities to socialize with typical students their ages. A senior and Special Education major at Lesley University, this past summer Aylward became the youngest person ever to be a head coach at the Special Olympics USA games for Team Massachusetts and was nominated for the Special Olympics MA Hall of Fame in October.

“It’s a big night for my kids; they aren’t always afforded the same athletic experience as their high school peers in terms of playing in front of a large crowd. This gives them that chance. Although it’s an emotionally taxing night to plan for, it helps me feel connected to my friends,” Aylward remarked of the fundraiser event.

Admission to the basketball game is $5 per person, and fundraising T-shirts commemorating the event can be ordered for $15. But Aylward is actively seeking corporate sponsors as well, which generate a large portion of the money raised. 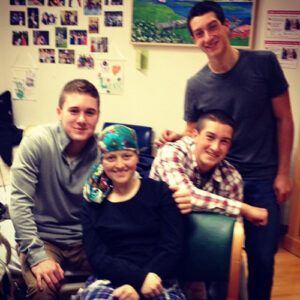 New This Year: Dinner
As Aylward said, not everyone can make it to the May 15 tournament due to graduations and other events. So, this year, there also will be a dinner and silent auction the week before, on Friday, May 8, at 6pm at The International in Bolton. The semi-formal buffet will include a cash bar and silent auction. A 1-week stay at a 3-bedroom home in Costa Rica will be raffled off separately.

Last year’s tournament raised a total of about $12,000, Aylward estimated, adding, “Each year, I try to get a little more.”

After graduation from Lesley, Aylward plans to open a fitness center locally catering to people of various disabilities, perhaps as soon as next summer. For now, when he’s not at school, Aylward works as a personal care attendant in Lancaster and Sudbury.

As for all this activity, Aylward reflected, “Will and Leah left a lasting impression on everyone they met that anything I can do to preserve that influence, I’ll do.”

Of his two friends, Aylward put it simply; “We kind of spent every day after school together. Things may have changed, but their importance in my life hasn’t.”

Anyone interested in sponsoring the Play for Will fundraiser should contact Aylward at brendan.aylward7@gmail.com. Sponsor names will be listed on the backs of t-shirts also sporting the 3rd Annual Play for Will logo. T-shirts are $15. Email Aylward shirt size(s) and quantities, or any additional questions (such as on payment information). Sponsorships and t-shirts are available until April 9.