“Their faces were all plastered to the windows,” said Bolton Police Chief Vince Alfano of students at Nashoba Regional High School on Monday, May 19. They were watching a team of law enforcement officials conduct a K-9 drug search of the parking lots, moving from car to car in quick succession. Alfano describes the operation as part of a 3-prong effort to combat the presence of drugs at the high school, planned and executed by Bolton Police, State Police and the Nashoba administration. 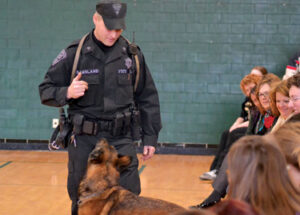 “Their faces were all plastered to the windows,” said Bolton Police Chief Vince Alfano of students at Nashoba Regional High School on Monday, May 19.  They were watching a team of law enforcement officials conduct a K-9 drug search of the parking lots, moving from car to car in quick succession.  Alfano describes the operation as part of a 3-prong effort to combat the presence of drugs at the high school, planned and executed by Bolton Police, State Police and the Nashoba administration.

The first phase of the plan introduced students to the police dog and his talents in a special presentation at the school a few months ago. At that time, and through further communication efforts to parents, the school administration stated that unannounced searches would take place over the school year, said Alfano.   Phase two of the plan involves the parking lot searches, followed by phase three, addressing the interior of the school, including areas around student lockers.

As students watched the action unfold,  Alfano presumes word spread quickly and within minutes, a 17-year-old male student from Bolton exited the school, raced to his vehicle and tried to exit the property.  According to Alfano, the student, known to police, physically fought with the Student Resource Officer and school officials who tried to prevent him from leaving the building. Alfano said the student nearly ran over an officer with his car, failed to stop for a police officer and resisted the eventual arrest, which also included charges of reckless driving and driving to endanger. Officers blocked the exit of the car from school property and once the vehicle was stopped and the student arrested, the canine was brought over to search the vehicle.

“We figured he must have had a good reason for trying to flee,” said Alfano. The dog turned up marijuana, under an ounce, resulting in a $100 ticket. The car was impounded and released to the student’s parents the next day.

“It was a very dangerous event and the student made some very poor choices,” said Alfano, clarifying this only reflected the actions and behavior of one student, not the greater student body.  No other drugs were found in vehicles during the day’s search, said Alfano, though it will not be the last one conducted this school year.

Alfano said that the proactive response from the school to the Endicott Risk Behavior Survey completed by students, which asks students to answer anonymously about their drug and alcohol usage, has resulted in the visible presence of school resource officers at the school, 24 hours per week, and plans for searches such as this one, being conducted by the K-9 teams.  Plainclothes officers also patrol outdoor sporting events held at the campus. “We are sending a message that is loud and clear. If you have something in your car or on school property, we will find it,” said Alfano, explaining the group’s mission is to keep the school environment safe and drug-free.

Alfano wants parents to realize that the illegal drug situation at Nashoba should not be classified as an epidemic, as it may be in other communities. “The issues and concerns with illegal drugs at Nashoba is no greater or no worse than other high schools with the same demographic,” he said.  While he cannot be absolutely certain that more serious drugs like heroin and cocaine are not within the school itself, he and his officers have not seen them. The police occasionally come across prescription pills that may be intended for illegal use, but Alfano said those situations are rare.

“Among young people here, it is mostly marijuana,” Alfano said, adding that kids are very aware of the decriminalization status of marijuana, resulting in a $100 ticket if possession is found to be under one ounce. “But that misdemeanor charge remains on your record,” cautioned Alfano, as do any criminal charges of driving under the influence that might be brought against an individual.”
Alfano added that marijuana is often categorized by experts as an entry level drug, potentially leading users to more serious drug abuse.  “Since the decriminalization of marijuana, we have seen a massive increase in marijuana possession among young people,” he said.

While Alfano said that 99% of the drug possession among area teens involves marijuana, alcohol is really their drug of choice.  “Alcohol is absolutely the most commonly abused drug among teens,” he said.  Wary of all the end-of-school events, including graduation, area police say that parents need to know what their children are doing, who they are hanging out with, and where they are going. “Kids today have a lot of freedom. Parents don’t know or don’t ask about what their kids are doing,” Alfano said.   Those same parents, if found to be the homeowners where a party is held that results in a police visit and observation of underage drinking, will be held liable, cautioned Alfano. “Parents do not escape responsibility when a house party takes place that involves minors and drinking,” he said.

Alfano is hopeful that school administration and voters in all three District towns  will support an expansion of the school resource officer position to full time; something he feels is truly needed and can make a real difference. He believes the officer has already thwarted or prevented many situations from growing or even taking place that could otherwise be detrimental to student life on the campus. “I can’t say enough about how important this position has become,” he concluded.