Breaking News
Home » Sports » Oliver All Over: Running the Rapids

Oliver All Over: Running the Rapids 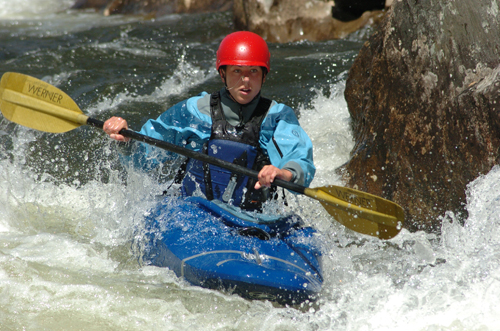 Helmet? Check. PFD, paddle, stubby little boat? Got them. To navigate the Class I-III rapids of the Deerfield River, you need those items, plus a snug spray skirt to keep the water out of the whitewater kayak while it secures you inside. A daunting thought when I realized that if I needed to get out of the kayak fast, I was most likely underwater.
A year ago my husband, Larry, and I, wanting to take a step up from recreational kayaking, decided to try whitewater kayaking and loved it. Earlier this month, we went back to Zoar Outdoors in Charlemont, Massachusetts for a two-day clinic for additional instruction on running the rapids.
Have you been in those big inflatable boats on the Deerfield or in Maine on the Kennebec? That isn’t whitewater kayaking, that’s rafting. Same rivers, same rapids, so people confuse the two. Whitewater kayaking is you in a plastic container navigating the rocks and getting pushed around by the currents and eddies.
So, the first, and most important, lesson is how to wet exit, which means getting the heck out of the kayak when you are upside down in the water. After being outfitted with a kayak, which felt like being shoehorned into a sardine can compared to my large recreational vessel, the instructors brought us to a still water reservoir in Vermont (that’s how far west and north Charlemont is) to practice the Houdini-like feat.
At first, the wet exit sounded difficult and well, life-threatening, until I twisted underwater and realized the steps the instructors methodically described is exactly what my survival instinct executed in panic mode: duck, pull the strap of the spray skirt, slide the boat off like a pair of pants and then breathe the air because I escaped. Phew, except now the kayak is full of water and I had to drag it to the shore to dump it.
Whitewater kayaks are designed to navigate nimbly on a river, which makes it difficult to just go straight. Paddle on the left, paddle right, and suddenly you are facing backward. But after a morning reviewing paddling strokes for control and how to use hips and knees to edge the boat, we hit the river to test our skills. 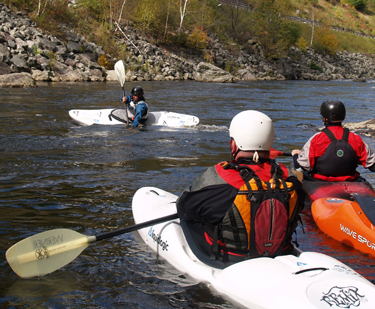 We were barely in our boats before we had to decide how to navigate the aptly named Hangover Helper rapid: right (easiest), left (tight and swirly) or over the rock in the middle. As with most of the obstacles on the river, the guides pointed out the options and let us to choose our challenge. I emerged awake and with sharpened focus – even though I didn’t imbibe much the previous evening.
The crew at Zoar did great job of modifying their instruction to make the newbies comfortable while taking time out for Larry and I to perfect our kayak rolls. If you can roll over in your kayak, you don’t have to wet exit and you get to breathe sooner. We both nailed a few rolls in slow moving water, but in a “combat” situation in rushing water, we found that our roll attempt was quickly vetoed by our old friend survival instinct, who kicked in and bam – no cool move to save a mistake, just a trip to the sideline to empty the boat.
As we traveled down the scenic Fife Brook section of the river, we passed through rapids with names like Freight Train and Pinball, stopping along the way to learn new skills, play in the waves and eddies (currents created by an obstruction, like a rock), and practice wet exits – albeit unintentionally. We spent a lot of time “peeling out,” which is entering a strong eddy correctly, and the practicing the skill of ferrying across the river (face your boat upstream and look where you want to go).
There are also places where we were able to paddle our kayaks into some waves and by using our hips to make continuous adjustments and paddling to stay pointed upstream, we were able to “surf” the wave. We also got a chance to plunge into the river off the top of a large rock (about five feet high). This feat made everyone who did it look cool, except for me, who just got cool (and more practiced at emptying water from my kayak).
Whitewater kayaking is a great activity if you already recreational or sea kayak and want a different challenge, or, as one member of our group stated, if you like water sports, but are afraid of sharks. If you’re interested, there are a number of outfitters on the Deerfield River who teach instructional classes, as well as clinics held by the Eastern Chapter of the Appalachian Mountain Club.
I found I preferred running the river, nimbly (hopefully) navigating the rocks and rapids while Larry liked to stop and explore the eddies and surf the waves. We saw young kids with their parents or enrolled in a camp enjoying the rapids, as well as a woman in her eighties who is a local legend. There’s a river challenge for everyone, including rafting or tubing, if that’s more your speed… all without sharks.