While Stow’s elementary school students are enjoying a new Center School, they are not cooling off with sips of tap water quite yet. Center’s dry 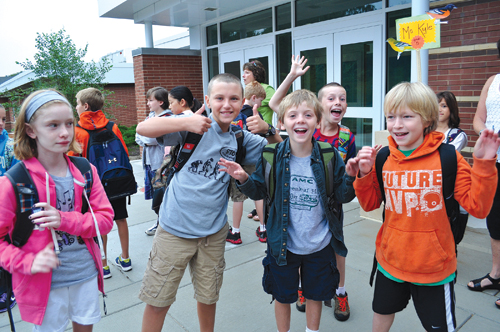 condition and other details needing to be looked at before school opened yesterday were discussed at Thursday’s special Elementary School Building Committee meeting.

Town Building Inspector Craig Martin broke the news that thirsty students will be offered bottled water, rather than heading to the water fountain (there is one in each classroom). He explained that this is due to a recently discovered high rate of carbon dioxide in the water.

To permanently fix the problem, ESBC Co-Chair Ellen Sturgis reported that the same filtering system in place at Hale Middle School was installed at Center last week. The Department of Environmental Protection told project officials they could use either potassium or chlorine in the system, so Sturgis said they are waiting for consultants to come back with a recommendation.

“The water coming out of the sinks is perfectly fine for washing and for flushing,” stressed Architect Phil Poinelli. Martin agreed with Poinelli that the situation should not stop the building from being certified for permanent occupancy.

Questioned as to why the issue did not turn up earlier in the water-testing process, Owner’s Project Manager’s Rep. Paul Griffin maintained the carbon dioxide was triggered by a reaction between the pipes and the natural elements in the well water, something that was not known until the water flowed through the pipes.

The Committee agreed the cost for the filtration system and bottled water should be paid for by the project rather than the Nashoba District. Though Poinelli estimated this cost at $3,000, he cautioned, “As a rule of thumb, you should double that. Seriously.”

Punch List Fever
The renovated wing of Center opened under a certificate of temporary occupancy, but still is waiting for its certificate of substantial completion from Martin. The Committee agreed the wing is very close to seeing that certificate, with Poinelli predicting it will be issued at the end of this week. 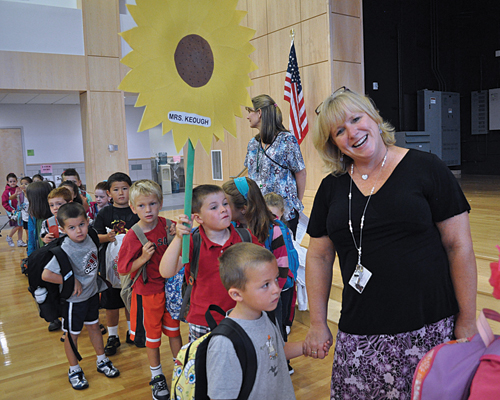 For now, Martin reported he is quite comfortable with the building being occupied, with his own punch list of to-do items down to only a few tasks. One of these he listed is to designate a fire lane in front of the Great Road entrance, per the Fire Department, though live parking there should not be an issue.

While not much may remain to be done, the Committee appeared adamant that it be finished soon.

When Griffin mentioned that he believed Clerk of the Works Glenn Davis’s hours could be shortened by the end of this week, Sturgis insisted that may be too soon. She maintained Davis should probably be kept on site fulltime through the month, if the job was to be finished off without issues. Griffin replied, “The contract says [personnel] as needed after substantial completion.”

“If you guys just bail and take off part-time, then we’re not going to make it,” Sturgis retorted. “I have never bailed on a project,” Griffin insisted. However, Griffin pledged to keep Davis on site for 40 hours per week until the punch list is finished.

As for safety, while any work continues, Martin said that the school door locks have been changed, so that workers can no longer walk into the building. Only staff key cards open the doors.

Another task remaining is to remove any leftover furniture from the former Pompositticut and Center. With the cancelation of last week’s planned open sale of this furniture to the public, Wood noted that the project must pay to remove this surplus. However, he explained that town offices will first be able to take any items found to be useful.

Outside the building, Griffin said the sodding of the back field was his main concern, something that must be done by mid-October to make it potentially usable for the spring.

The next scheduled ESBC meeting is Monday, September 10.