Stow’s long defunct railroad ran from Marlborough, past Hudson, through Gleasondale, past Lake Boon, along the river through Maynard to 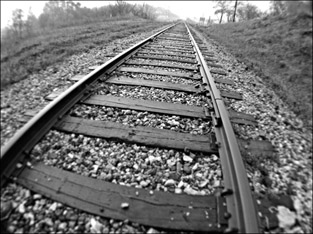 Acton.  Its rails are spaced exactly 4 ft 8.5 inches wide.  Why such an odd number?  It’s nothing unique to Stow; in fact that’s the spacing of railroad tracks throughout the US, actually throughout most of the world. It all makes sense in the end.

But let’s start at the beginning, going way back to the Roman legions of Imperial Rome.  The Romans traveled throughout their vast empire using a standard Roman war chariot, which had its wheels spaced 4’ 8.5”.  Since these roads were dirt, the chariots formed ruts, several for the horses, but the deepest were made by the chariot wheels.  These roads extended throughout Europe and even in England.  When people in these vast areas started to use wagons and other vehicles to travel between cities and farms, they often used the Roman-built roads, and if they didn’t space their wheels the same as the ruts in the roads, the wagon wheels would be torn apart in short order. 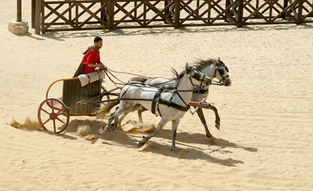 When trams and railroads came into existence, for construction convenience, they used the same jigs and tools that were used for building wagons, which used the 4’ 8.5” wheel spacing.  When railroads started to show up in the US, they were designed and built by English expatriates and used the same track separation as they used in England.

Horse-drawn wagons in the US used the same wheel spacing as they used in Europe because that is what they were used to.  These wagons and stage coaches soon wore ruts into the dirt roads of the US, and when cars started to appear here, they had to use the same rutted dirt roads that the wagons and stage coaches used, and therefore spaced the auto wheels the same 4’ 8.5” spacing.  And although our roads are mostly paved now, we are stuck with the same wheel spacing as used by the war chariots of ancient Imperial Rome over 2000 years ago.

But that still doesn’t explain how such an odd spacing came about. The war chariots were pulled by two horses and were made just wide enough to accommodate the width of the rear of these horses, which turned out to be 4 feet 8.5 inches.  See, I told you at the beginning of this article that it would all make sense in the end.