Home » Features » Past Tense…Streetcar in the Woods

Past Tense…Streetcar in the Woods 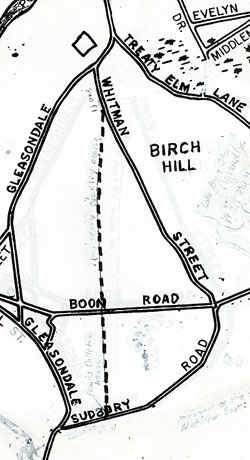 It was in the early 1900s when the Concord, Maynard and Hudson Street Railway Company considered providing service from Hudson, going through Gleasondale, Stow and Maynard, and continuing to Acton and Concord.  The tracks were to be in the street so that no special railroad bed or bridges needed to be built.  However in Gleasondale, a row of worker’s houses were so close to the road that they all had to be moved back about 30’ to provide room for safe streetcar passage.

But between Gleasondale and Stow, the road had to go over the steep grade of Birch Hill, and it was too steep for the relatively low powered electric streetcars to climb.  The solution was to go around Birch Hill rather then over it.  To do so, the streetcar needed to go off the street and through a farmer’s field.  The farmer, Andrew Smith, didn’t like that idea since it would divide his planting area and the noise and commotion of the streetcars passing by could cause the farm animals to be disturbed.  He turned down the request to provide the easement needed to lay down the track that would detour around Birch Hill.

After some time trying to negotiate with Farmer Smith, the streetcar company decided they would bypass Stow and instead go along side the existing railroad, running along the river directly up to Maynard.  That decision didn’t sit well with the Stow Selectmen who had already lost the convenience of having a railroad station in Town like all the other surrounding towns.

The railroad that was to connect to the main line in Marlborough with the main line in Acton, bypassed Stow because of strong political pressure by the stagecoach people who didn’t want their stagecoach business in Stow taken over by a railroad station.  If Farmer Smith didn’t allow the streetcar to cut through his field, forcing the streetcar line to bypass Stow and go directly to Maynard, Stow would have had no streetcar service as well as no train station. 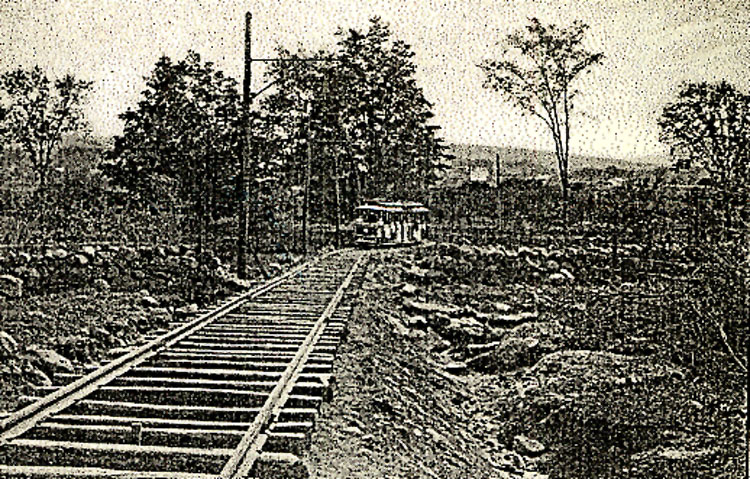 The Selectmen called an urgent meeting with Farmer Smith to negotiate with him and to convince him to let the streetcar go through his field.  Farmer Smith was reluctant to even meet with the Selectmen, so the Selectmen scheduled the negotiations to take place at his farmhouse instead.  It was a nice day and the meeting was held outside under a big elm tree.  The details are not known, but the outcome was that Farmer Smith allowed the streetcar to cut through his field, starting about 800 feet up Whitman Street, into the woods, crossing Boon Road and joining Sudbury Road in Gleasondale.  With that, Stow soon received streetcar service right down the center of town on the way to Maynard.

Oh, and by the way, the street directly across the spot where the treaty was signed between Farmer Smith and the streetcar company under pressure by the Selectmen, was later named “Treaty Elm Lane”.