Talk about haunted houses in Stow and most residents will tell you “nonsense.”  One exception would be Francis King, one of the former owners of the red brick house in Gleasondale who was adamant that this 1814 house was haunted.  There are other things about this house besides being haunted that are very unusual, as told in a 1980 article published by Kathy Olohan in the old Stow Villager newspaper.

This home, located on Route 62 in Gleasondale, is unique in that it is the only brick house in the Gleasondale area.  The house is believed to have been built in 1814, the same year a brick textile mill was built nearby by Joel Cranston and Elijah Hale.

Another unusual feature of this house is that it sits much closer to the street than the other houses in the area.  The reason for this dates back to 1900.  That is when the trolley cars started to run along the road from Gleasondale to Stow. To provide for the tracks of the streetcars, all the houses along the east side of this part of Route 62 were moved back.  Obviously, this special home, being made of brick instead of wood, could not be moved, so it remains close to the road (and very close to the trolley tracks).

While doing some repairs, it was discovered that three ships’ masts help hold up the roof of this house.  It was not unusual in those days to do something like this since people used whatever materials were available (such as bricks left over from building the brick textile mill), and the ships’ masts were of strong, durably quality. 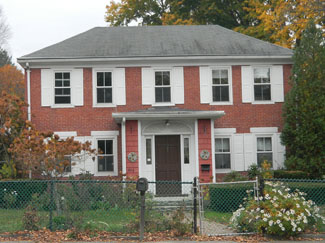 Perhaps the most interesting feature of this house is its resident ghost.  Former resident and owner Francis King said that every time he took hammer and a saw to the house, he would have a visitor.The first time he became aware of this ghost, he was sitting in the kitchen.  He saw a rocking chair begin to rock of its own accord, then dishes shook on the sink; a broom in the corner stood upright, and a black form walked through the room to the back yard.  Friends visiting the house have also seen the black form.

Mr. King later discovered that his ghost was a young woman of slight build.  On two occasions he was awakened in the night and saw her carrying a candle; she was dressed in a pink nightgown and nightcap.  His wife, Helen, said that she never saw the ghost, but many times she heard doors closing and footsteps upstairs when there was no one else in the house.  Once when she was vacuuming the staircase, twelve books that sit in a heavy metal bookrack on the table on the landing at the head of the stairs fell upon the stairs as if someone had pushed them off the table.

There are those who would say that the three ship masts are an important part of the ghost explanation.  There was probably some unknown tragedy around 1800 that took the life of the ghostly visitor and the ship on which she was traveling.  When the ships masts were recovered and used to build the brick house, the ghost came with it, and to this day, gets curious whenever any change is being made to the house, no mater how small.  It’s possible (isn’t it?).