Past Tense…Home Call to All Stow Soldiers

According to “Recollections of Stow” by Francis Warren, early in World War II, Rev. Howard Andrews of the Union Evangelical Church sent the church’s monthly newsletter to their parishioners in the service.  It soon expanded to take in the Unitarian Church, and then the Gleasondale Methodist Church.

When Rev. Andrews went into the service as a chaplain, Rev Howard F. Smith, the Unitarian minister, became the editor, and the newsletter became “The Home Call”.  Hazel Moore, Blanche Symonds, Olive and Virginia Wetherbee, and Carolyn Gray typed, helped with the letter writing, mimeographed, and mailed this newsletter to everyone in the service.

“The Home Call” continued all through World War II.  Here are greetings made by some Stow residents in the Nov 2, 1944 issue of the newsletter, and a reply by one serviceman:

From Emily Derby:  “The townspeople speak so kindly to one another about you service folks, I often wonder if you realize how much we share your joys and sorrows.  As the Christmas season comes again and you think more often of home, do fill some of your spare moments realizing how much affection we at home have for you who are asked to give so much.”

From Franny Warren, Town Clerk:  “The town is just the same except that the supply of footloose and fancy-free males between 17 and 55 is very small.  The National War Fund Drive, which includes the U.S.O., is just about over with some very encouraging results.  It looks now as if the goal of $600 for Stow can be met.  To date we have sent out over 60 ballots to service persons and have received back 29.  Expect more of them this week.  We wish that all of you might be back home for Christmas, but I know that many of you are too far away for that.  There are a lot of you to whom I should sit down and write a letter, but this will have to do for now.  Always glad to see any of you come home, and I think of all of you oftener than you would believe.”

Letter that Joe Pyszka wrote to Ruth Patterson:  “I hope you’ll excuse me for not writing to you for such a long time, but this place is really upside down.  We are packing to go overseas, and you can just think what goes on here.  Everyone is guessing as to where we are going and I bet that not one has the right answer yet. … You take a place like Stow and you have a little of everything.  It’s the ‘South’ when you get a real warm day and look forward to going swimming in the brook.  Then you always have the ‘East’ because of the way people get along with each other.  The 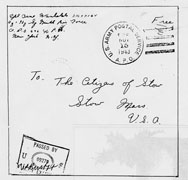 ‘West’ comes in when some farmer brings his horse to get shod.  And the ‘North’, well, could you find a better place to ski than the hills of Stow?  So, you see, it is only Stow that can boast of being the crossroad of the world.  I guess I miss the old place a lot to talk that way about it.  It’s been cool here, but not cold yet.  The leaves haven’t started to change yet.  They say that it doesn’t take place until about the middle of November, but I suppose we’ll be a long way off by then.   It seems funny that some of the fellows want the East coast and the others want the West.  But for me, I’ll take the East.  I’d rather fight the Germans.”