Bolton Railroad had a Short Life 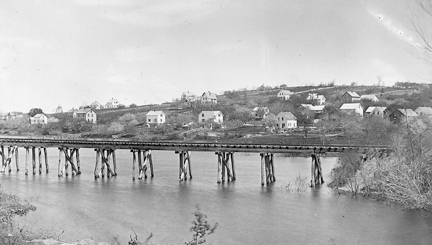 Stow had no railroad pass through its center (although there had been two in Gleasondale), but our neighbor Bolton had one, at least for one day.  Here is a portion of the description of this unusual endeavor provided by Noel Hanson in Bolton’s May 1, 1980’s Evening Gazette newspaper.

“On April 30, 1870, the Lancaster Railroad was given its charter by the state to run through the center of Bolton from Lancaster to Hudson.  It was to connect with the Worcester to Nashua N.H. Railroad on the Lancaster end, and to the Marlboro branch of the Fitchburg Railroad on the Hudson end.  The line, eight and three-quarters miles long, ran east from Lancaster to Bolton’s center, where it turned southeast to Hudson.  It passed directly across the mill pond in Hudson on a trestle (see picture).  Work began in 1871, and went through the winter months into 1872 in fits and starts because of financial problems faced by the directors.

“The directors found it hard to agree on both serious and trivial matters.  One argument was whether the trains should all start from Hudson or Lancaster.  They finally agreed to start half the trains from one end and half from the other.  The trains were never to run on Sunday, except in case of mercy or emergency, with the exception that in the summer, the Lord’s Day Special would bring passengers to worship service at the Bolton Hillside Church near the tracks.  Also, all trains were to provide the passengers with a break of 20 minutes at Bolton Center Station.  However, to protect the passengers, the directors ruled that no popcorn, peanuts or prize packages, Sunday Heralds, nor all other unreliable papers will be sold on the train.  Newsboys can sell both the ‘Clinton Courant’ and ‘Hudson Pioneer.’

“In spite of all the elaborate scheduling and rules, only one passenger car ever ran over the track.  It was a trial run with several railroad officials and a few area residents on the train.  The officials were there to inspect the operation and give their finial opinions.  After this, the railroad was shut down having never officially opened.  Lack of money was the reason given.  Also contributing was a disagreement with the railroads that planned to lease the facilities. Those leases were never signed.

“The railroad cost more then $220,000 to build, including stations, tracks, and property. It declared bankruptcy in 1874, and sold in 1883 for only $15,000, having run just one train on the completed railroad.  Perhaps this railroad was a dream that was doomed to fail from the start.  It was underfunded, and had a board of directors on which every man thought himself the chief executive.”