Past Tense…Lite Version of Stow’s History

Sitting on a shelf in the Town Vault was this copy of an article that had no identification of author, date or origin except for the curious initials 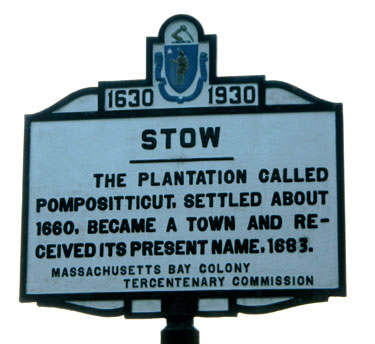 “I.S.” at the end.  It is a very light capsulated version of Stow’s familiar history told in an unusual way that needs to be shared.

Stow, a town in Middlesex County, 8 miles southwest of Concord and 24 miles west of Boston, has always lived a modest life.  In its way, it is typical of hundreds of Massachusetts towns and villages which have seen too many winters come and go not to develop a measure of patience and indulgence.

The Indians knew the town, or an approximation of the same, as Pompositticut.  John Kettle and one Boon, two “adventurers” from Charlestown, wandered in with their families about 1650, bought land from the Indians and settled in.  This meant cutting down trees and raising crops.

All went reasonably well, excluding people and weather, that is.  When King Philip’s War erupted in 1675, the two settlers and families fled to safety, but “unhappy Boon, in attempting to remove his household goods, was ambushed and murdered by the Indians,” related an early historian.

Stow officially became a town on May 16, 1683, contrary to the Massachusetts Bay Colony Tercentenary Commission marker at the Maynard line, which gives the date as 1685.

It was named in honor of John Stow, a close friend of Simon Bradstreet who was governor of Massachusetts.  Settlers tested the soil, found it light and sandy, excellent for raising hops, a profitable crop in demand for home brewing.

By 1837, two woolen mills were busily spinning, a shoe and boot factory was thumping out footwear.  Palm-leaf hats and straw bonnets were also made and for a time the silkworm madness, which swept Massachusetts, was enthusiastically cultivated.

Stow clings to a fine, exciting legend involving William Goffe, who along with Edmund Whalley, was a member of the High Court of Justice, known as Regicides, established by the British House of Commons, which cost King Charles I his head.

The monarchy came back under Charles II, who promptly set out to bring his father’s executioners to justice.  Goffe and Whalley fled to Boston in 1660, only to discover that royal officers were on their trail.

The Regicides fled to Connecticut and there again narrowly escaped Charles’ vengeful scepter.  They hurried to Hadley in Western Massachusetts, where they hid and were protected for 15 years.  The crown’s reward of 100 pounds for either of their heads still stood.

Stow’s legend is that a mysterious stranger named John Green moved into town with his long white locks, troubled no one and kept to himself for the most part.  There were whispers and meaningful looks, but he was left alone to eke out his remaining years in peace.  When he died, he was quietly buried and all but forgotten.

But the Regicide story clung to local history and by 1930 someone decided to do something about it.  John Green’s grave was opened in 1930.  The skeleton was there – but without a head.
Tradition claims that someone had sent it to England for the royal reward.
(– I.S.)