There are nine players on a baseball team, but during the Division 1 State Championship game on Saturday, Nashoba had trouble with just one member of the Bridgewater-Raynham squad, southpaw pitcher Mike Bruemmel. Bruemmel threw a no-hitter into the eighth inning, until Nashoba’s Jack Sarnoski hit into the gap in centerfield to get on base. But that late attempt at a rally didn’t work out for the Chieftains, who lost 4-0 when the final out was called.

“The kid pitched a great game,” said Nashoba Coach Chuck Schoolcraft. “There’s nothing you can do about it. He had us off-balance all day long. Whoever called the game over there did a really good job. We just couldn’t hit the ball today.”

Despite the lasers coming off Bruemmel’s arm, Sarnoski’s hit in the eighth wasn’t the only time Nashoba visited the base paths. In the bottom of the third, Ian Coull was left at second and in the seventh Jordan Edmonds reached on a Bridgewater-Raynham error, but was stranded at third. In the bottom of the ninth in a final push, speedy John Militano capitalized on an infield hit and beat out the throw to first.

On the mound for Nashoba was senior Drew Foster, who has been strong for the Chieftains all season. Foster allowed three runs (two of them earned), eight hits across seven innings, and one walk. Sarnoski took over on the mound to start the eighth inning.

“These kids have nothing to hang their heads about. They had a great season,” said Schoolcraft. The coach said he reminded his team about the successes that led them to the State Championships. “I told them 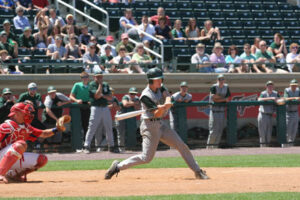 there are over 300 teams sitting at home today watching or doing something else. 21-4 isn’t a bad record.”

Schoolcraft praised all his seniors, calling them the “mainstay” of the team. “Drew and Jack on the mound were unbelievable this year and they played great in the field also. Danny Cacciatore did a great job behind the plate catching for us,” said the Coach. “At the beginning of the year we didn’t know whether we were going to have a catcher or not and Danny stepped up and did a great job.”

Schoolcraft said the fact that Nashoba was in the State Championship game was a tribute to his players. “They’ve had great team chemistry all year long. They battled, they’ve been friends and will remain friends,” said the coach. “There’s just not enough words to say how I feel about this teams, these kids. They did a great job, won a lot of ball games.”