Happy Anniversary to The Stow Independent! It was actually several weeks ago – proves how well we’re paying attention! April 4, 2007 was our first issue. Seven years later, we’re still going strong and we hope we’ve continued to inform, educate and entertain you over the years. 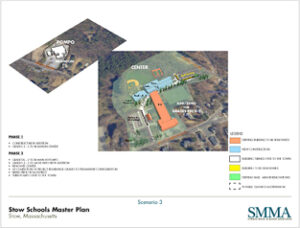 Center and Pompo school buildings or abandon Pompo and do an add/reno on Center. Shown above is the plan that was ultimately voted in. This May, voters will have the opportunity to decide what the now-abandoned Pompo building might hold.

Another, much sadder, anniversary occurred yesterday. The Boston Marathon bombings remain as a milestone in the minds of many – the victims, the in-person witnesses, the first responders and those of us that simply watched in horror as the events unfolded in news reports from multiple sources. We are glad to see so many of the victims, having picked up the pieces of their lives, moving forward with determination not to let that day stop them. And we honor the memories of those who did not get that opportunity. I hope people remember the words of  8-year-old victim Martin Richard, “No more hurting people. Peace.”