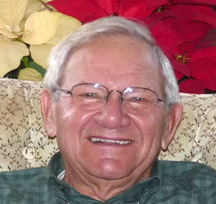 Peter J. Laskey, age 88, of Stow, passed away peacefully on Friday, August 8 at his home, surrounded by his loving family.  He was the beloved husband of Elizabeth (Ostrowski) Laskey, to whom he was married to for 60 years.

Born in Greenfield on July 20, 1926, he was the son of the late Joseph and Mary Laskey. Raised and educated in Greenfield, MA, Peter graduated from Greenfield High School in 1944. He served in the United States Air Force during World War II and the Korean Conflict.

Peter married Elizabeth (Ostrowski) Laskey on July 3, 1954 in Claremont, NH and in 1966 settled in their current home in Stow.

Peter worked for many years as a shop foreman at All Metal Fabricators in Acton, MA.  He retired in 1992 and during his spare time and retirement, Peter enjoyed spending time with his family, as well as fishing, hunting, golfing, and cooking.

Family and friends will gather to honor and remember Peter on Thursday, August 14, at the Fowler-Kennedy Funeral Home, 42 Concord St., Maynard, MA. Visitation is from 10:00 am -12:00 pm, with a funeral service immediately following.  Interment will follow at Brookside Cemetery, Stow.

Arrangements under the care of Matthew M. Farrow, Fowler-Kennedy Funeral Home, A Life Celebration® Home, Maynard. To share a memory or offer a condolence visit: www.fowlerkennedyfuneralhome.com

Richard J. “Dick” LaRosee, age 57, of Lancaster, formerly of Stow and Waltham, passed away on Tuesday, August 5, 2014 at Life Care Center of Nashoba Valley.  He was the beloved husband of almost 34 years to Joanne (Bergantino) LaRosee.

Dick graduated from Waltham High School and in 1980 married and settled in Stow.   He worked for many years as a facilities manager for various commercial companies in Massachusetts.

Dick’s greatest joy was spending time with his family through camping trips, barbeques and teaching others his love of fresh and salt water fishing.  He was an avid New England sports fan and loved watching Bruins and Patriots games with friends and family.  Dick was also a collector of military memorabilia and enjoyed learning the history behind it.

Along with his wife and father, he is survived by his sons, Marc J. and his wife Leslie of Derry, NH and Dennis J. and his wife Allison of Waltham; his granddaughter Violet LaRosee; sisters Susan Mahoney of Westford, Karen Savoie of Sterling and his brother William G. LaRosee also of Sterling.  He is also survived by many nieces, nephews, cousins, friends and his beloved dog Cooper.

Family and friends gathered to honor and remember Dick on Friday, August 8 at the Fowler-Kennedy Funeral Home.  His funeral mass was celebrated on Saturday, August 9  in St. Bridget Church, Maynard.  Internment  was private.

Arrangements were under the care of Matthew M. Farrow, Fowler-Kennedy Funeral Home, A Life Celebration® Home, Maynard.  To share a memory or offer a condolence visit: www.fowlerkennedyfuneralhome.com