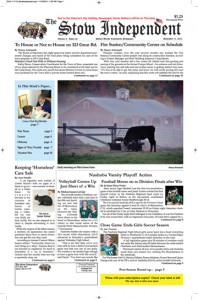 The Board of Selectmen last night approved police and fire department personnel changes, and heard of the final plans being considered for uses of the town property at 323 Great Road…

Pleasant weather over the past several months has pushed the Fire Station/Community Center project well along its construction timeline, according to Project Manager and Stow Building Inspector Craig Martin…

A cat regularly seen outside of Center School—with no signs of a home to go to— was recently re-located to a foster home by someone devoted to the concerns of homeless cats. Found at Center wearing a collar, the cat was very likely not feral (wild), but no one stepped in to claim it, despite advertising in local media…

Volleyball Comes Up Just Short of a Win

The seventh-seeded Chieftains varsity volleyball team held a late lead in the fifth and deciding set and had No. 10 Shrewsbury on the ropes. However the visiting Colonials never threw in the towel as Shrewsbury rallied for a 3-2 victory in first round action of the Central/West Massachusetts Division 1 Tournament…

Also in this week’s Print Edition…