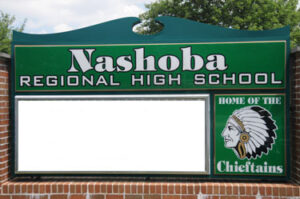 In his report, Superintendent Michael Wood said, “I am consumed with a sense of urgency that our buildings, procedures and staff meet protocols. We are human, we want to be open, but those days must be measured with a dose of reality.” (For more on Nashoba school security, see School Security article on page 1.) Immediately, Wood noted he is making sure the staff and visitors are following routine safety steps, such as wearing their identification badges at all times, and asking those who idle in the no-parking zones to move their vehicles right away.

Security also came up during Nashoba Director of Facilities Bill Cleary’s presentation on potential upgrades over the next few years to Nashoba Regional High School. Wood said that the draft is part of the district’s overall capital spending plan for the next 5 years.

One of the safety concerns Cleary addressed was the number of outdated and confusing signs. “With the events of the past week, I believe it is time to fix them, though this has been in the works.”

Other security-related improvements, which arose a few weeks ago with talk of thefts at the high school, would be adding 200 lockers next year (so no one is sharing a locker), more later, and upgrading the video surveillance system. Cleary estimated that only 30% of the school interior is covered by current cameras, and none of that is classroom space.

A security shortfall Cleary pointed to from this fall’s lock-down drill was a lack of shades for the classrooms.  He also stressed that the building needs new locks to replace the long-used system that means there are still old keys circulating. Ideally, Cleary said he would like to install a card-swipe system in all doors to the building. When it comes to taking students outside for class time, he maintained, “In some cases, the only way for teachers to get back in is to stop the door open.”

Though safety items would likely be a priority in the NRHS 2013/14 budget, Cleary emphasized that other needs must be studied. “It’s just not appropriate to have the gym air circulated as the fresh air for the locker room,” Wood dryly remarked of a possible upgrade to the HVAC system.

Other larger potential projects would be upgrading grass athletic fields; moving the baseball field; replacing a portion of the roof; purchasing a new  hot-water boiler to replace one of two aging units; and replacing/repairing the gas, electric, and water connections in the Science labs.

Over the next 5 years, the total wish list of replacements and repairs would run more than $1.3 million, though both Cleary and Wood emphasized that the report is only a draft.

On the Brighter Side
In its last vote of the calendar year, the Committee unanimously approved  the third draft of the new District Improvement Plan. Updated annually, the plan’s four goals for this year are to foster and sustain educational services that support, enrich, and extend the curriculum; to identify indicators that accurately measure the unity and parity of the district’s schools; to improve the space and materials needed for a  quality education; and to develop a communication plan for everyone connected with Nashoba.

It was announced that the Nashoba School District website has been upgraded. The revamped site can still be found at www.nrsd.net