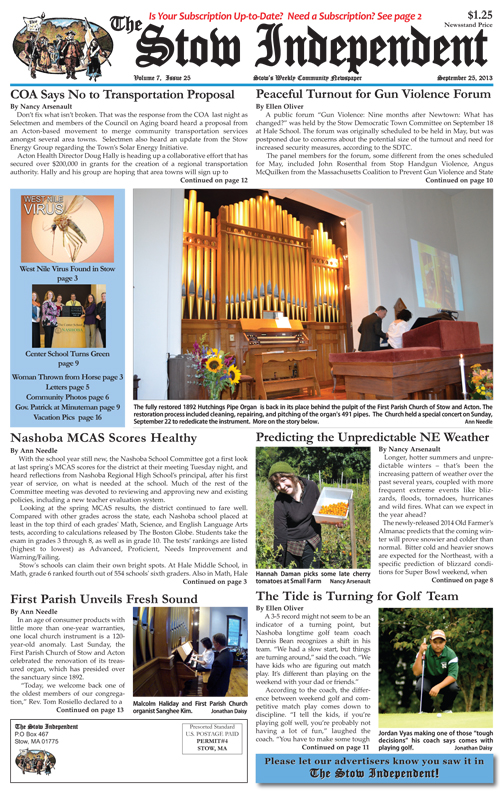 COA Says No to Transportation Proposal

Don’t fix what isn’t broken. That was the response from the COA  last night as Selectmen and members of the Council on Aging board heard a proposal from an Acton-based movement to merge community transportation services amongst several area towns.  Selectmen also heard an update from the Stow Energy Group regarding the Town’s Solar Energy Initiative…

Longer, hotter summers and unpredictable winters – that’s been the increasing pattern of weather over the past several years, coupled with more frequent extreme events like blizzards, floods, tornadoes, hurricanes and wild fires. What can we expect in the year ahead?

In an age of consumer products with little more than one-year warranties, one local church instrument is a 120-year-old anomaly. Last Sunday, the First Parish Church of Stow and Acton celebrated the renovation of its treasured organ, which has presided over the sanctuary since 1892…

The Stow Board of Health was informed on Tuesday that a mosquito carrying West Nile Virus was found in a trap in the Bradley Lane area of town. The BoH reported, “The positive mosquito sample was collected in Stow by the Central Massachusetts Mosquito Control Project on September 20, 2013.  The type of mosquito identified was a Culex, which is a bird biting mosquito, and can bite mammals but is rare.”

At approximately 6pm Monday evening, Stow Police and Fire were called to the parking lot of the Delaney Wildlife Management Area. According to officials on the scene, a 20-year old Paxton woman had been thrown from a horse in the parking lot following a ride…

Past Tense: Tickle Me in Brimfield