This time last year, the Nashoba Regional High boys basketball team was a come-from-behind, feel-good story. Under the energized leadership of a young, first-year coach, the similarly young Chieftains had doubled their win total from the year before, and finished the regular season just two games out of first in the Midland League B. And though they’d also qualified for the MIAA State Tournament, no one would’ve faulted them for mere happiness to be there. 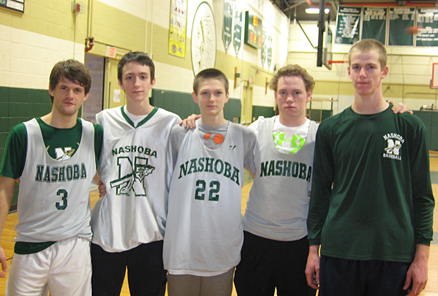 This time last year, the Nashoba Regional High boys basketball team was a come-from-behind, feel-good story.  Under the energized leadership of a young, first-year coach, the similarly young Chieftains had doubled their win total from the year before, and finished the regular season just two games out of first in the Midland League B.  And though they’d also qualified for the MIAA State Tournament, no one would’ve faulted them for mere happiness to be there.

This year, they aren’t so easily pleased.

Since their season-opening win over Algonquin, the Chieftains have shown this lack of complacency to every opponent.  They trounced Gardner by 33, ripped Hudson by 35, and hung 31-point beatings on both Marlborough and Groton-Dunstable.  With an impressive 74-63 road win over state tourney-bound St. Bernard’s on February 12th, Nashoba finished the regular season 12-7, and headed, once more, for the state tournament.
First up, though, was the prestigious Clark University Tournament, to which Nashoba earned its first invitation in 10 years, and which was played just before press time.  There, the Chieftains were attempting to not only win the school’s first Clark title since 1977, but also secure the highest state tourney seeding possible. Unfortunately, the lost by 3 points to Quabbin with a final score or 70-67.

The team was hoping to get a high enough seed so that the first-round game would be at home, according to towering tri-captain Nick Campana of Stow.

The Chieftains’ tournament success, however, won’t ride on how many games they get to play in the gym where they’re a league-best 14-5 over the past two seasons.  But rather, it will ride in large part on the equally large shoulders of Campana himself.  During the regular season, the 6’6” center led both Midland B and all of Divison 2’s Central MA region in scoring, averaging 15.7 points, and countless intimidations.  Indeed, with fellow 6’6” senior Kevin Connelly at his side, Campana transforms the lane into a realm that opponents drive at their own risk, the rim a place where rebounds don’t dance long.

“Nick’s a force down low,” said second-year coach Danny Ortiz.  “He’s one of the best big men in Central Mass.  He can definitely play college ball.”

Right now, though, Campana is a high school player, one with a deep and talented supporting cast.  “This is the most talented, well-rounded, close-knit team I’ve played on at Nashoba,” said senior swingman Ross Cressman, also of Stow.  “And Coach Ortiz knows how to get each of us to play to our strengths.”

In that very strength-knowing vein, Ortiz refers to Cressman as his, “defensive specialist.  Very intense, with a high basketball IQ.”   And he holds his other three players from Stow in the same high regard.

Junior power forward Joey Guerin, says Ortiz, is “another smart player.  Joey’s got great post moves, and big ups around the basket.”  Meanwhile, senior shooting guard Matt Sabourin does his best work from long range.  “Matt’s one of my best pure shooters,” said the coach.  “Totally fearless.  He’ll take a three from anywhere.  But he can drive to the hoop, too.” 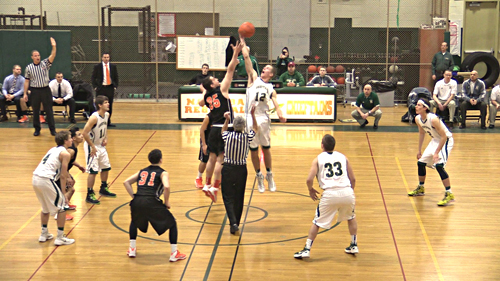 For all Ortiz holds the four Stow upperclassmen in esteem, though, it’s the youngest Stow resident on his roster, freshman Andrew Snoddy, who makes the coach’s eyes grow widest, and not just because Snoddy shares the same gene pool as his sister Nikkiah, a 6’1” star on the powerhouse Nashoba girls team.

“That kid,” said Ortiz, in the tone of a horse trainer who, in a long-legged colt, can see the thoroughbred he’ll one day become, “is going to be a player.”

Right now, though, Ortiz and his Chieftains are focused on the present, the big Clark Tournament, the even bigger State one to follow.  But ask Ortiz for the key to a deep and exhilarating postseason run, his answer is relatively simple.

“Defense,” he said.  “I know we can score, but if we don’t bring the intensity on D, we won’t go far.  If we pressure the ball and force turnovers, though, we can play with anyone.”

It’s tournament time, and the Nashoba Chieftains are hoping to pen another feel-good story.  And if they play to their potential, this one could end in a place where even the hardest-to-please teams are happy to be.