No, there is no town of Stow in the country of Turkey, and no, this is not a reflection on any personality in our town.  It is simply a review of some left over Turkey facts that might go well with the last of the leftover 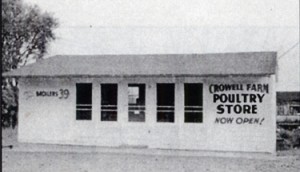 Sometime in Stow’s agricultural history, between cows and crops in early years, and apples and golf courses popular today, Stow was a large poultry producer, mostly of chickens and turkeys.

Although cows and crops go together as a good farm combination for small farmers, it became an even better combination for the much larger farms out west, and with their lower production costs, the local farmers could no longer compete.  So after World War I, local farmers started to switch to a different kind of crop, chickens and turkeys.  Naturally, over time, the big western farmers took over chicken and turkey production as well, which is one of the reasons why Stow farming now concentrates on apples and vegetables.

The largest producer of chickens in Stow during those ‘poultry’ years, was Henry Eriksen, with 2000-3000 hens in large hen houses on Great Road at the Maynard line and more on Boxboro Road.  Farmers with large turkey flocks were Gerry Lawrence, at 389 Taylor Road, who raised as many as 10,000 turkeys at a time; and Ralph Crowell who raised 2500 to 3500 turkeys per year and had a store at what is now the Lower Village Shopping Center.

Did you know —
• The dark coloration of turkey legs as compared to their ‘white’ breasts is not due to the amount of blood in muscles but rather to a specific muscle type and its ability to store oxygen.
• Columbus thought the land he discovered was connected to India (which is why he called the natives “Indians”).  India had a large population of peacocks, so Columbus decided to call them tuka, which is the word for peacock in the language of India.  Others say that the name ‘turkey’ came from Native Americans who called the birds firkee, which sounds like turkey.  Some say that the turkey name came from the sound turkeys make when they are afraid – “turk, turk, turk.”

• After the first Thanksgiving in 1621, it took over 200 years before Abraham Lincoln proclaimed the last Thursday in November as a national day of Thanksgiving. Congress later changed that to the 4th Thursday of November.

• If you visit the Republic of Turkey, an eastern European nation, you will not find turkey on the menu. It is referred to as what translates into “large bird.”

• Wild turkeys can run at speeds up to 25 miles per hour and can fly up to 55 miles per hour.  Domestic birds, however, are bred to be heavier and cannot fly.  This breeding has made their breasts so large that they can no longer reproduce and must be artificially inseminated.

• Because the wild turkey is a native bird with proud demeanor and protective instincts, Benjamin Franklin proposed that the Turkey be proclaimed America’s symbol rather then the Bald Eagle, which is more of a scavenger and will rob other birds and animals of their prey.

• In 1975, Americans ate 8.3 pounds of turkey per year and now consume over 18 pounds per year.  More turkey is eaten on Thanksgiving than on Christmas and Easter combined.  Wow! (burp)