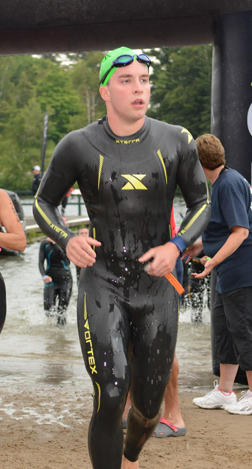 By Jess Thomas
With his stomach cramping, he pulled over after completing 50-plus miles of biking and a 2.4-mile swim in Lake Placid, New York.

“You are an Ironman,” were the four words he had been waiting to hear from the announcer and, after a year of intense training, Peduzzi completed his goal on Sunday, July 26.

“I don’t remember feeling much other than happiness because it was all over,” Peduzzi said. “I would never have been able to do this if it had not been for my support back home.”

Peduzzi, 23, became interested in athletics at a young age, as both his mother and father have run the Boston Marathon and competed in triathlons multiple times.

But it wasn’t until he worked as a volunteer at his uncle Mark’s bike aid station in Jay, New York that he realized what an Ironman was.

Peduzzi said, “I fell in love with the course and the atmosphere of the Lake Placid Ironman and after I graduated college in 2014, I just knew I wanted to do it.”

The Ironman competition consists of a 2.4-mile swim, a 112-mile bike ride, and a 26.2-mile run. The Lake Placid version is the second oldest Ironman race in the continental U.S.  Peduzzi told his Uncle Mark last fall that he was going to compete in the Ironman. Several months later, in February, his uncle passed away from a heart attack.

“He was a big inspiration for me to do this particular race and, after he died, the race became more than just a race for me,” Peduzzi said. “I knew he was there with me on Sunday during the race, pushing me through the toughest parts to get to that finish line.”

Peduzzi knew it wasn’t going to be easy, and despite competing in a few sprint triathlons and running indoor and outdoor track in high school and college, he was aware that disciplined training would be part of this ordeal.

He began training on his own in September of 2014 before meeting a Stow triathlon coach in January named Kendra McDowell, who has participated in many Ironman races.

Peduzzi’s training included swimming at least three days a week, as well as biking and running up to five days a week.  Training took as much as 24 hours per week at times.

“Some of the hardest parts about training was getting up during this winter we had and sitting on my indoor trainer for four hours, grinding away on my bike,” Peduzzi said.

In addition to the brutal winter, Peduzzi also gave up much of his social life, going to bed very early to get up for a workout before actual work. Peduzzi works as an athletic trainer.

Peduzzi said, “Challenges I faced were definitely the snow this past winter, fading finances as the race got closer and keeping my body free from injuries.”

And all of those challenges were before the actual competition began.

Sunday, July 26 rolled around and Peduzzi felt as prepared and ready as he could, as his first task was a 2.4-mile swim starting at 6:30 a.m.

With his family and girlfriend, Tina Orlando, cheering him on, Peduzzi finished the swim in 1:19, which was the time that he and his coach were shooting for.

“I was feeling great coming out of the swim heading into the transition area and the start of a long bike ride,” Peduzzi said. “Then 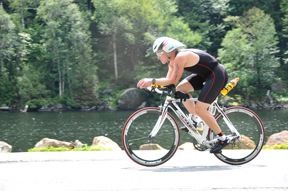 His stomach began cramping within the first mile of the 112-mile ride and persisted throughout the entirety of it.

This is where Peduzzi’s pure grit and determination pushed him to continue on and not give up, even though all of his attempts to solve his issues failed.

“Halfway through the bike ride, I had to stop and make a decision,” Peduzzi said. “End my day and ruin a year’s worth of hard training, or soldier on and hopefully make it to the finish line in time.

“It took every ounce of my mental game to tell my body to keep going even though it wanted to quit,” he said.

Fortunately, Peduzzi’s stomach calmed down as he started the marathon run, and despite his time not being what he wanted it to be, he knew he was going to finish the race.

He completed the first half of the marathon and saw his whole family cheering him on and pushing him up a big hill.

Peduzzi said, “They were the loudest group there and I couldn’t have asked for a better source of energy to draw on as I went back out of town for my final 13.1 mile loop.”

In a blur, Peduzzi trudged his way through the stretch run of his incredibly long and tiring day and finished the run in 4:52:10 for a combined time of 12:40:15.

“I am very happy with my performance even though it was not the day I had hoped for,” Peduzzi said, “I still finished in a very high place.”

He is now taking a few days off to rest his aching body, but he is already on the mend and looking towards what the future holds for him.

“I might start training for a marathon this fall or set my sights on more triathlons next summer,” Peduzzi said. “Another Ironman is definitely out there for me.” 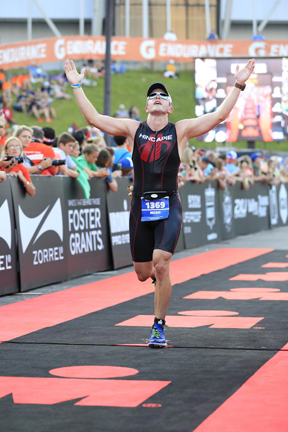